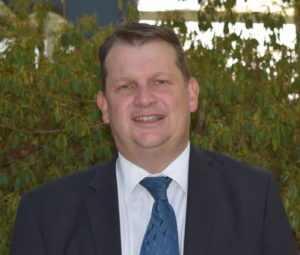 I am delighted to announce that Nick Smith, who was previously engaged by the Fund on a short term basis, has taken on the role of Executive Manager – Finance and Tax on a permanent capacity from 21 February 2018.

As a Chartered Accountant, Nick brings over 20 years financial experience to the team, having worked in Government and private sector roles, including a period at Airservices Australia.  Nick has worked with the Australian Government’s defined benefit superannuation funds, including management of the Parliamentary Contributory Superannuation Scheme (PCSS) and the financial management of the Civilian and Defence unfunded liabilities. Most recently, he was a commercial manager on the Future Frigate program at Defence.

If you have any questions about Nick’s new role, or any other matter about AvSuper or superannuation, please contact your AvSuper team on 1300 128 751 or AvChat (see link above).

The information or advice on this website is general factual information or general advice only and is not intended to be personal investment advice. Any general advice does not take into account your personal objectives, financial situation or needs, and should not be taken as personal investment advice or personal advice in relation to insurance or any other matter relating to an AvSuper product. Before you make any decision about acquiring or continuing to hold an AvSuper product you should consider the relevant Product Disclosure Statement.

While all reasonable care has been taken in producing this information, neither AvSuper Pty Ltd nor its directors warrant its accuracy or completeness and will not be liable for any loss or damage suffered as a result of any inaccuracies, errors or omissions. The content on this site may change at any time. If there is any discrepancy between the information in this website and the Trust Deed and Regulations, the Trust Deed will be the final authority.

Page load link
CHAT WITH US